School was not my thing. But I loved learning and had an intellectual curiosity. As an adult, I reflect back to my childhood state of mind to try to figure out why I received such poor grades.

I played on the computer, and hours upon hours were spent tinkering, building, and breaking concepts that were well beyond those of my school’s curriculum. There were no boundaries or arbitrary divisions, only many questions and then resources to answer them. And answer them I tried to do! Nothing inspired me more than unanswered questions.

So why then did I fail at school?

Is this curiosity not the key ingredient for a budding young mind?

The zeitgeist of the 90s sent mixed signals. On one hand, we had a hyper-functional post-industrial Western world operating at the fevered peak of its wildest, oil slicked dreams. On the other, we had the Internet delivering novel, unstructured information at a torrential pace. While the splendour and devastation of industry is clear, the impact of the early Internet years on our collective psyche is much more profound, and only now in the year 2020 have we started to come to grips with what it means to forever be coupled through a hyper-connective permanent record.

At school, the teacher’s gifted us refined stacks of paper which containied our formal studies. At home, a search engine provided a search box and limitless access to unfiltered ideas, vast in scope. We still act and perceive life according to that stack of papers, which like the Jungian depiction of a singular consciousness floating on the vast, collective unconscious “like a cork bobbing on an ocean”, has profound implications.

The Internet, analogous to Jung’s ocean-like collective unconscious as its conscious equivalent, is vast beyond fathom. Compared to it, school curriculum became the new cork. This is to say that what we were supposed to know, what we were taught to know became a tiny sliver of what we could know, or what we all now know.

School suggested life was one way, but all of it, all the screaming human madness blasting through the phone line’s dial tone into the computer, convinced me that there was more to the story. Yet school kept going. It didn’t budge at all. And how could it? How could a cork coach younglings into this ocean, the collective and cathartic deposit of millions of years of evolutionary mind-madness?

Each person who broke off the rails and embraced the depths of the early pre-aggregate Internet felt the separation. It was agonizing, a stark disassociation that felt right, yet was not at all understood by the static figures in life that one would look to for traditional social support: government, friends, family, teachers, elders. All relations risked becoming tenuous through this disparity, a schizophrenia known to those who strayed too far into the unconscious, yet now rooted and normalized, applied to the typical lived experience.

And who could tell who was afflicted with this memetic plague, who had been spoiled by the Internet? Like the cork that can’t fathom the ocean which holds it and contains it, neither could the school system fathom the Internet which would surpass it.

How well you could be molded, how well you could restrain this vastness, aligned in rough approximation to your letter grade, which in turn indicated the quality of your path through the institution and into the labour force and social hierarchy. Or so you were told, until this idea – like most other contemporary ideas of the future – was supplanted, if not blown apart, by the Internet.

Luckily, thanks to a white face and good teeth, I was able to scrape by with a nice sense of humour, a fair reputation – only plagued with lower Cs – and still found material success. I reflect back to the core question, “why” – why was I unable to succeed at school? The simple answer is that I was not able to behave. Too much energy, to the extent that my first school demanded I be placed on an amphetamine, to which my parents declined in wisdom.

The more interesting answer comes as yet another contradiction. I recall a wild-haired face plastered around the school, the poster-man for the academic institution who paradoxically held values that undermined its existence. A rebellious mystic, hiding in plain sight behind science, mushroom clouds and cryptic mathematical symbols. 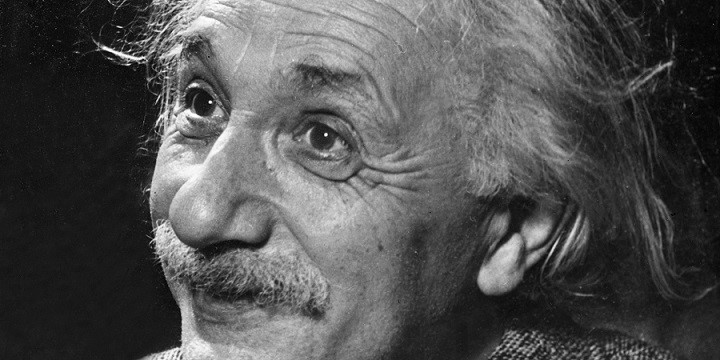 “Imagination is more important than knowledge."

This man and that phrase were everywhere. I learned more about the lore of Albert Einstein growing up, through physics and the study of the second World War. A great mind – often considered the greatest – who supplanted the Newtonian model of physical understanding with a new, mind-expanding relativistic postulate. But at the time, all I knew was that, like me, he had weird hair, and unlike me, he was in black and white which meant that he was old and wise, and people seemed to respect him.

I didn’t understand or identify with intellect, and I did not – to be certain – deify it. After all, what is “smart” to a failing student but for what you are not? Even still, I believed him with blind faith and trust, and I loved him for the eccentric spirit which I projected onto him.

“I believe in intuition and inspiration. . . At times, I feel certain I am right while not knowing the reason. When the eclipse of 1919 confirmed my intuition, I was not in the least surprised. In fact, I would have been astonished had it turned out otherwise. Imagination is more important than knowledge. For knowledge is limited, whereas imagination embraces the entire world, stimulating progress, giving birth to evolution. It is, strictly speaking, a real factor in scientific research."

I can’t tell you what I learned in math, sciences, social studies, or any of it. But I can say that this single idea won over all others. I was a terrible student because in my heart, at the core of my being, I felt that imagination was the highest ideal.

I knew that intuition, that the things I saw when I closed my eyes, that I felt in my heart – in my “soul” – that the scenes I participated in when I went to sleep, were just as real as the rigidities presented to me at school as the essential canon of a productive member of a high functioning society.

I knew that whatever was in my textbooks, whatever the teachers were trying to teach me, was but a small sliver of what there was to know, which could be explored through my home computer. And I knew that all of that, every one of the uncountable bits that these networks were producing was yet smaller still when compared to the vastness of the unconscious. The Internet became the new cork, vast though it was.

“There is no universe beyond the universe for us. It is not part of our concept. Of course, you must not take the comparison with the globe literally. I am only speaking in symbols. Most mistakes in philosophy and logic occur because the human mind is apt to take the symbol for the reality."

Einstein discovered that measurements of space and time remain the same when measured within, and up to, the speed of light. Fittingly, the consciousness that we experience happens in our physical bodies, as light, while our unconscious experiences happens upon the dark. Every physical being that is not accelerating through space as a faster than light beam perceives the same physical truth. As far as our flesh-suits go, this is the way.

But the beautiful things all around us, the unknowable things just out of the grip of our consciousness, are ever-faster than light, yet slow beyond measure, limitless, endless, right here and right now, available through the imagination. Consciousness is a cork, born from light, and so always a cork. Even when that cork itself is an ocean, the black vastness expands in elegant accordance.

If I were to have been taught from this book, the book that does not exist but as an ideal stretching beyond light in an irrelevant position of space and time, then I would have learned that there is much more to life than we can capture in our symbolic knowledge structures.

Imagination is more important than knowledge, more vast than knowledge, more powerful, more truthful, and yet more simple and more accessible. All can revel in it, whether you’re rich or poor, smart or stupid. Virtuous conquest of the mind and enduring growth of the spirit will never be found through intelligible symbols. They are allies, tools, but not answers.

Why did I fail? I felt something deeper. I felt I had to preserve my wild and creative spirit. The cork, it seemed, was to be my prison. And I wanted no part of that.

“I see a pattern. But my imagination can not picture the maker of that pattern. I see the clock. But I cannot envisage the clock- maker. The human mind is unable to conceive of the four dimensions. How can it conceive of a God, before whom a thousand years and a thousand dimensions are as one?"